'Till We Meet Again 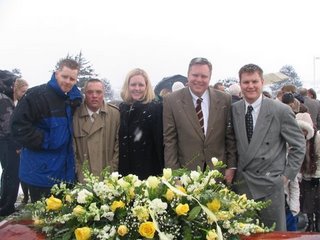 On January 22nd we laid our mom and nana, Andrea Forsyth, to rest next
to her eternal companion. We had a beautiful service that paid
tribute to the wonderful woman we will all miss dearly. Good-bye
mom-- 'till we meet again.

Don't Cry Because It's Over, Smile Because It Happened! 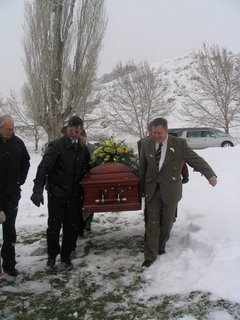 You have been sent 1 picture.

These pictures were sent with Picasa, from Google.
Try it out here: http://picasa.google.com/

Our beloved Nana, mother, sister, and friend, Andrea, ended her courageous battle with cancer, surrounded by loved ones at the LDS Hospital on Thursday, January 17, 2008.
Andrea was born September 9th, 1947 in Havre, Montana to Andrew Walter Larson and Loretta Ann Menge.
She married her eternal companion, Douglas Richard Forsyth, in the Salt Lake City Temple on November 3, 1967. They resided in Orem for thirty-six years where they happily raised their five children.
Andrea was blessed with many gifts and talents. She loved singing and the performing arts. She enjoyed gardening, and was a wonderful cook and seamstress. Andrea playfully referred to herself as a “Domestic Goddess”! She was an active member of the Sharon Park 2nd Ward of The Church of Jesus Christ of Latter Day Saints. She served in a number of positions over the years. She was a strong supporter of Scouting and a proud mother of three Eagle Scouts and one “Brownie”.
Andrea gave ten years of service to the Alpine School District, through her tireless effort serving on the school board. She was referred to as the “Champion for students with disabilities”. She co-founded the “ Possibilities Unlimited” Conference, to help other parents of children with special needs.
Andrea is survived by her children, Douglas Richard Jr. (Jodi), Colorado; Darren Scott (Jamie), Saratoga Springs; Daniel Patrick (Emily) Nevada; Alisha Louise Heath (Corbet), Highland; Dustin Michael, Orem, seventeen grandchildren, and many loving family and friends.
She has been re-united with her husband, parents, two brothers, two brothers-in-law, and two nephews.
We wish to express our deepest gratitude for the LDS Hospital Bone-Marrow Transplant Team for their tireless efforts in caring for our mother.

Funeral services will be held Tuesday, January 22, 2008 at 2:oo in the Sharon Park 2nd Ward Chapel, 200 North 200 East in Orem. Friends may call Monday from 6 to 8 p.m. at the Sundberg-Olphin Mortuary, 495 South State St. Orem, and also one hour prior to the services at the Ward chapel on Tuesday. Interment will be in the Orem City Cemetery.

I am so sorry

I had hoped and prayed, as I know you all had, that she  could beat this and be here with us longer.  But I know that our Lord must have a much more important  need for her.  May He bless you all with comfort, peace and healing.  She was a terrific woman and she has left you all with many riches and much love to last your entire lives.  I have great memories of both of your parents and those will comfort me.  My prayers will continue to be with you and yours.  God Bless - Love Joanne

Mom ended her valiant battle with cancer at 11:50 P.M. on Thursday Jan. 17.  She left this life surrounded by her family to reunite with her beloved husband.  We will all miss her.  We thank all who have been a part of her life.  We love you.
Doug, Darren, Daniel, Alisha, and Dustin

Another room change happened today, still ICU: E631
Not a whole lot has changed. Still not responsive, white cell count is continuing to rise.
Love you all,
Alisha

I just wanted to give everyone an update about Mom since Alisha and Darren are busy with caring for her. This morning they moved her to the ICU because she was having trouble breathing. She is fighting several infections. They have not yet put her on a ventilator. One good thing that is happening is that her white counts are coming back up (300 yesterday 800 today) and may rebound enough to fight the infection and everything else that's going on. I know that your prayers count for Mom and they definitely help in our comfort.

Thank You for Fasting

Thank you Sharon Park 2nd ward for dedicating your fast to my mom. I remember 20 something years ago the ward fasting for me as I was going in for back surgery. I was blessed by the faith of the saints in the second ward, and I know that same faith will get my Mom through these tough times.
Nothing really new to write, one step forward, two steps back. Doug and I are sitting here waiting for the Doctors to come in and tell us everything is going to be O.K. That is what I am hoping for.
Love you all,

We had a real scare today, Alisha received a call from the hospital at about 3:00 that mom had suffered a heart attack.  It turns out that it wasn't really the case.  They took her down stairs and did a endoscopy.  It turns out that she had a lot of mucus in her airway and that caused her elevated heart rate.  She is back in her room now and she seems to be resting right now.  This all comes with a possible new set of problems.  We will know in a couple of days if there is any infections that we need to worry about.  The problem we are really facing is that nobody really knows what is going on.  There are a lot of doctors with a lot of theories.  We will just to continue to pray for what ever the Lord has in mind for her and for the strength to accept his will.  We love you all
Darren

I sorry I haven't written for some time, but it feels like I have talked to most of you on the phone. I have been there almost everyday in the past week. I have seen a steady decrease in functions and speech, which Dr. Asch saw also. Yesterday they did a Lumbar Puncture, or Spinal Tap, they saw nothing out of the ordinary there. I have mixed feelings about that, I was hoping for some infection that they could fix and everything would be fine. But on the other hand she has no Lymphoma in there either, Yea! They are still leaning toward toxicity in the cerebellum, causing a little swelling, that is why the speech is gone, and her head is bobbing. We are hoping this is the problem and everything will be fine too.
Thank you all so much for love and concern for Mom and the rest of us. I have been very scared and heartbroken by this pothole in her journey, but also very comforted by family and friends.
Thank you Aunt Gwen for rallying the troupes, and Sheree for the idea of the alphabet chart for communication.
Love,
Alisha

I had a chance to visit with mom this morning for a while.  She was alert but tired.  She was able to say a few word like hello and I love you.  I was there when Dr. Ashe came in and she was very happy with her progress.  She still thinks that these side effects from the meds will go away and she will get better.  I asked her about the next phase of her treatment and she says that they won't do anything for at least two weeks, but they need to keep moving forward.  She said that they need her to get better before they can do anything else.  We are greatful for the visits and I know they really help Mom.  She is really frustrated and scared and friendly faces are a comfort to her.  If you have any time she can use the visits.  Remember tomorrow is fast Sunday.
Thank you,
Darren

Mom has been moved

Well we recieved some good news today,  Dr. Ashe told Alisha that all the info that she has read about the kind of siezures that mom has had, suggest that the affect should be reversable.  Dan said that she was alert and very aware of what was going on.  She still can't speak even though she tries.  She has also been moved out of the ICU and back to the eighth floor.  We have high hopes for a full recovery and your faith and prayer are always welcome and appriciated.  Thank you for all you do.
Darren

Since this Sunday is Fast Sunday I would like to invite everyone to join our Family in a fast for Mom. Because of her setback we think that she could use a little bit of extra faith. Thank you for all of the prayers and I know that Mom is always on prayer rolls at several Temples.

I talked to mom on New Years Eve and everything was going good, she had just finished the forth and final round of chemo. She was tired and was looking forward to the new year, she said 2008 is going to be great. Then at 8:30a.m. on New Years day I received a call from the nurse saying that mom had been moved to ICU because she was having multiple seizures and that I should come up to the hospital. We I got there she was still seizing and had bitten her tongue and lips, her mouth was all bloody. She was still making sense, but was having a hard time talking. After a lot of test they have determined that there wasn't a stroke or infection, it was a drug interaction between two of the chemo drugs. She was still having small seizers when I left today at 1:00 p.m., they hopefully will subside as the chemo drugs leave her body. We are still concerned about her neurological function, a lot of slurring of words and she can't tract with her eyes. We have a great team of brilliant doctors that are working on getting her back. I have faith that 2008 is still going be great, can it get any worse? Knock on wood!

Thank you for your concern and many prayers,